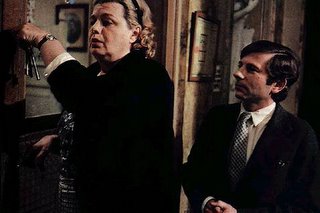 In my first of a handful of films dedicated to Shelley Winters, Shelley plays the creepy concierge of an even creepier French apartment building in the third installment of Polanski's loose trilogy of the horrors of apartment-dwelling (see also Repulsion and Rosemary's Baby). Truly one of Polanski's stranger endeavors, he casts himself as a man renting an apartment whose former tenant killed themselves and can't figure out what's going on with his bizarre neighbors. The wretched Joe Eszterhas borrowed a lot from The Tenant with little success for Sliver, but instead of dealing with any of the fascinating gender issues, replaced the Polanski role with Sharon Stone. If seeing Winters in one of her creepiest roles doesn't thrill you, maybe seeing Roman in drag or the lovely Isabelle Adjani giving HJs in movie theatres might suit your fancy.
Posted by reassurance at 10:12 AM

My fancy certainly is satisfied with hand jobs in movie theaters. Thanks!