I’ve turned into somewhat of a masochist lately. Since I work at a video store, I have endless access to the countless uninspired duds that the studios throw on your shelves each week. Strangely enough, I have indulged myself in some purely awful cinema for no other reason than I knew how much I’d hate it. So, since I can’t sleep, here’s my list for the pits of 2005. Keep in mind I still haven’t seen The Wedding Crashers, Elizabethtown, Hustle & Flow, North County, or whatever drivel Jennifer Aniston came out with this year. (And, no matter how masochistic I may be, I can’t bring myself for the torture of watching Bewitched). This year also marks the first year the United Statesians have swept the list.

10. Happy Endings – dir. Don Roos – USA
As the first of three “I bet I can really drive my message home by telling it through a series of not-really-unrelated people,” Happy Endings’ mix of nastiness and earnestness is like water and electricity… when you’re in the bathtub. While this probably marks the first time I’ve liked Maggie Gyllenhaal, she cannot overshadow the irritation that is Lisa Kudrow, Steve Coogan, and Jesse Bradford (also loses points for putting Laura Dern in a thankless role). Its dreadful when-the-fuck-is-he-going-to-end-this closing montage with oh-so-clever text is matched in awfulness only by this year’s number one pick.

9. The Hitchhiker’s Guide to the Galaxy – dir. Garth Jennings – USA/UK
So, honestly, I haven’t seen all of this film. But from what I have seen, it’s this year’s biggest waste of decent special effects (except for maybe The Island), and the Alan Rickman-voiced robot is the most witless animated comic relief character since the new Star Wars. 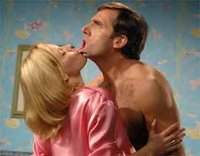 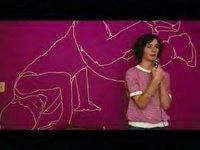 6. Havoc – dir. Barbara Kopple – USA
In a lesser year, Havoc would have easily taken the coveted spot of worst of the year, featuring the Princess Diaries herself whipping her tits out and responding to her parents’ interrogations with lines like, “to get away from this life!” You can tell Anne Hathaway’s character was bad because even Bijou Phillips’ parents didn’t want her hanging around their daughter. To quote my friend Mike H, Havoc is “about as sharp and edgy as an oval-shaped blanket full of kittens.” Well put.

4. Pretty Persuasion – dir. Marcos Siega – USA
Presumably made as a response to the edgeless-ness of Mean Girls, director Siega has brought us the Heathers clone of 2005… a vile mess starring teen edge queen Evan Rachel Wood, who embodies a blinding sexuality most young actresses couldn’t dream of matching and who needs to branch away from crap like this (and Thirteen) if she ever wants to get respect. Wood’s character is to be the “devil in a gray skirt;” Siega has accomplished the feat of making his film the only thing more despicable than her.

3. Dirty Love – dir. John Mallory Asher – USA
Yeah, I probably shouldn’t have even seen this one, written and starring (yes, you read that right) the incomparable Jenny McCarthy. That this film presumes we’re going to care about a woman who flops around a supermarket looking for tampons to stop her Shining-size bloodbath of a menstrual flow is not only dead-wrong, but also rather insulting. Guess what, in the end she dumps her jackass, attractive boyfriend and finds love in the sex appeal barren nerd who’s always been by her side. And we’re the ones who have to pay. 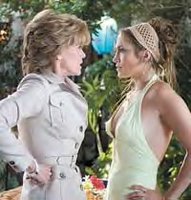 2. Monster-in-Law – dir. Robert Luketic – USA
Setting women back nearly fifty years with this one, Jane Fonda returns to the screen, opposite the sweet-as-pie, stripped-of-race Jennifer Lopez. It’d be one thing for this film to just be unfunny… but it’s a two-hour-long cat fight, turning women into caddy, selfish, backstabbing cunts. Fonda’s character, as we learn from her opening scenes, is meant to be a strong-willed, powerful woman – but after being set off, she turns into a howling banshee whose unfounded hatred for her son’s fiancée (J. Lo) can only be interpreted as her being a contemptible shrew. With a strange gay agenda as well, Monster-in-Law should have been the worst of the year. And it tried hard. 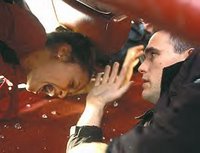 1. Crash – dir. Paul Haggis – USA
How did Crash, Roger Ebert’s pick for best film of 2005, beat out both Monster-in-Law and Havoc and a film written by Jenny McCarthy? For precisely the reason that people mistakenly think this is a good film. With its in-your-face aggression, Crash wants to be the important social film you might have heard it is. However, Paul Haggis’ directorial debut is nothing more than another post-Altman piece of garbage, far worse than the others because it thinks it’s so important. In fact, Crash is obvious, overblown, bull-headed, overlong. It addresses the issue of heated race relations in Los Angeles, coming to a painfully simple conclusion… where Sandra Bullock realizes her faceless trophy wife “best friend” isn’t really a good person and finally accepts her Latino maid. What’s essentially one easy thesis, pumped with empty confrontation, dragged out in six or seven or eight (or however many) interlocking stories, Crash bluffed and tricked its way onto several top ten lists of the year, but I was not and shall not be so easily played the fool
Posted by reassurance at 8:32 AM

I derive great pleasure from knowing that no one with a measurable IQ would ever take you seriously as a film critic. You are a fool among fools.