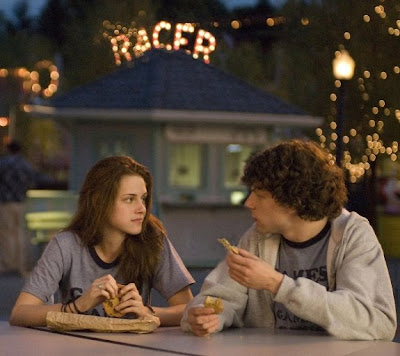 There's something strangely admirable about the way Judd Apatow comedies (or Apatow-esque in the case of Adventureland) handle earnestness. All of the films that fall under this umbrella go exactly where you expect them to, and while some work better than others, their sincerity nearly permits a forgiveness that most dude-centered comedies are never granted. This isn't to say that Adventureland or any of its not-so-distant cousins are good films, but it's hard to really dislike them. In Adventureland, college grad James (Jesse Eisenberg, doing his best Michael Cera) finds himself back in Pittsgburgh, taking a job at a local theme park after his European vacation is canceled due to lack of funds. 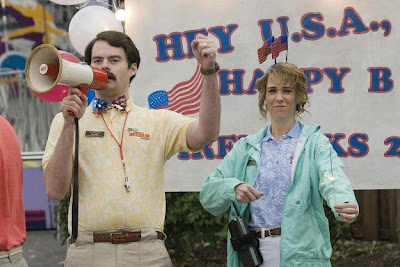 Every review I've read has felt the need to mention (warn?) that Adventureland isn't the uproarious, zany comedy Mottola's Superbad was, but those moments are still present, albeit in diluted form. Mottola doesn't seem confident enough to part with the sort of juvenile, "this is the part that is going to make people laugh" comedy, all of which is reserved for the characters of James' childhood friend Tommy (Matt Bush) and the managers of the theme park (Bill Hader and Kristin Wiig). None of these bits work, though I can't say I've ever found any of these sorts of films remotely funny. Mottola's inability to fully return to the humor of The Daytrippers without going by way of Superbad isn't the only foul. 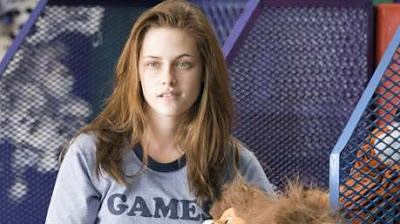 Enter Em (Kristin Stewart), the hip, attractive coworker who James will inevitably fall for. While Mottola unfortunately reduces a lot of the characters (including James) to clichés, he makes an ill-fated attempt not to do that with Em. She's sexy, mysterious, more spontaneous than the protagonist, has a dead mother and an amazing record collection. After their initial bonding, the camera moves for the first time away from James and follows Em to her rendez-vous with "a friend." You see, Em's assumed the position of "the other woman" to the unhappily married Mike (Ryan Reynolds). Like most of what happens in Adventureland, you know the story well by now. However, with the shift in perspective also comes the first change in tone, and this is not only a poor transition but crude disclosure of the director's disapproval of Em's actions. As she pulls away from James' house, the airiness of the rest of the film gives way to a sense of trepidation as she pulls into the bar, almost as if the secret she's harboring were of a more horrific ilk than just an affair with a married man. Though it may be subconscious on Mottola's part, this action condescends Em, as well as Stewart who otherwise gives an effective performance. 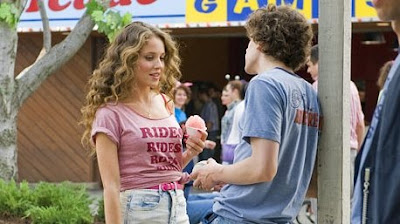 This is carried over to Lisa P (Margarita Levieva), the theme park's resident hottie. Once her slow-motion entrance into the film has passed, she's treated to the same conflicting characterization as Em. On one hand, she's blessed with more depth than her Nick & Norah counterpart Tris, but Mottola can't resist placing her in opposition to Em, to whom she's never allowed to live up to. Lisa P dances with her best friend Kelly (Kimisha Renee Davis) to Shannon's "Let the Music Play;" Em drives around in her car listening to Hüsker Dü's "Don't Want to Know If You Are Lonely." Lisa P doesn't respond to James' mention of his Charles Dickens aspirations; Em seems charmed by it. Lisa P gossips; Em keeps secrets. And so on. Mottola seems as clueless when it comes to women as James does, which shouldn't be a surprise as the film is semi-autobiographical. 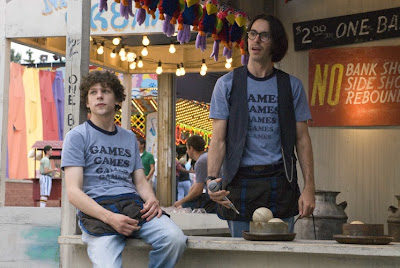 Despite all this, Adventureland suffices on its own sincerity. For all the fantastic music featured in the film (The Replacements, Big Star, Lou Reed and Yo La Tengo, who provides the score), it isn't holier-than-thou or even obnoxiously showy, though I can't help but wish directors would move away from the diegetic use of music giving way to non-diegetic montage cues, which is even more irritating in Nick & Norah. While every attempt to improve upon the run-of-the-mill coming-of-age tale flounders, Adventureland's less ambitious pursuits happen to work, which isn't something that can be said about most Hollywood romantic comedies. But a Richard Linklater film this ain't.
Posted by reassurance at 12:53 AM

The film reminded me a bit of what Judd Apatow used to be during his reign of Freaks and Geeks: the cliches exist within the character-types but not necessarily within the greater story itself, the jokes are softer than they are funny, and like you said, it's incredibly hard to hate.

I will disagree you about the shift in focus after Em drives off to the mysterious bar for the first time. To me, that odd little moment works for it gives her agency, something often lacking in male-centered romantic comedies. Compare her to Lisa P, who in the world of the film only exists from the point of view of James. Lisa is really just a ride at Adventureland. Em, on the other hand, is not, despite her more promiscuous behavior, and I think this jarring shift helps prevent this, even if the literal motivation for her driving away isn't particularly interesting.

It would have been a better film without Kristen Stewart and Ryan Reynolds. They were both so boring, at at times unbearably bad. Maybe it was the script, but I doubt it.