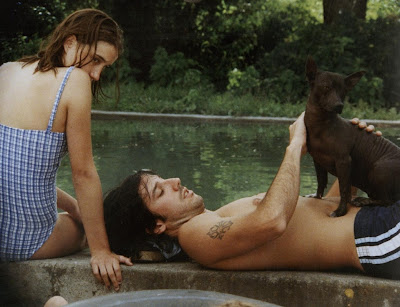 Following close behind Sébastien Lifshitz as my favorite filmmaker to emerge within the decade, Lucrecia Martel represents the most promising figure in Argentinean cinema, a country whose artistic surge on the map of international cinema has unjustly received less attention than Romania. No other country produced a string of film debuts more striking than Argentina, with Martel's La ciénaga, Lucía Puenzo's XXY and Alexis Dos Santos' Glue. La ciénaga's setting, a crumbling summer home in the northwest part of Argentina, provides a metaphor for the state of ruin within the upper middle-class family, and on a larger scale, the white aristocracy of the country itself. 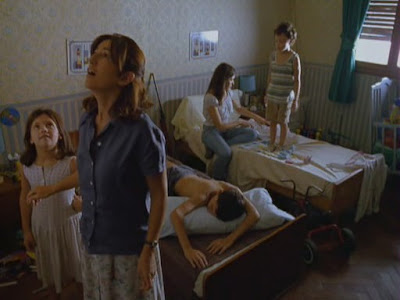 Unlike one of 2001's worst films Life as a House, this isn't spelled out for the viewer or handed with a plate of schmaltz (or a shitty title, though maybe the comparison to another middling Kevin Kline film The Ice Storm is more accurate). It seeps within the film's narrative, though it's pretty difficult to call La ciénaga a narrative. Set across five or so sweltering summer days, the children of two families convene at the summer house of Mecha (Graciela Borges) and Gregorio (Martín Adjemián). After falling and cutting up her chest, Mecha recovers from her drunken accident, which opens the film, by planting herself in her room watching news footage of yet another sighting of the Virgin Mary. Her cousin Tali (Mercedes Morán) brings her children to play with the seemingly endless number of young bodies that run through the hallways and swamp (the literal, English translation of the title) and lounge across the house's beds. Mecha and Tali have grown apart for reasons unbeknownst to us, though it may have something to do with Tali having a better grip on reality than her boozy cousin. 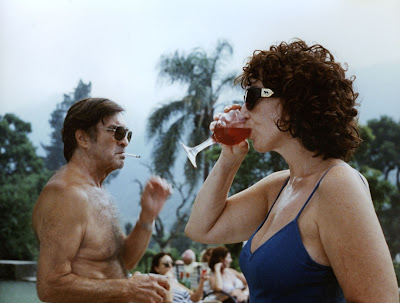 There's nothing flattering about how Martel portrays the adults in La ciénaga; even Tali shares her cousin's unsavory racism, though it's more in check than Mecha's without the amplifying effects of alcohol. The opening scene provides the visual clue as a bunch of "adults," most of which are too drunk to even stand up, drop handfuls of ice in their wine glasses. Cellulite and beer bellies mark the flesh their bathing suits don't conceal. Most of the children are no better, with scars and cuts in place of their elders' aging marks, but with parents as inattentive as Mecha and Gregorio, it's hard to expect any less. 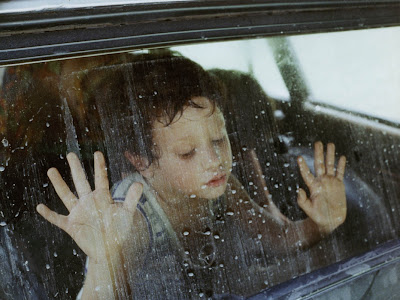 The characters in La ciénaga can be defined by their excuses. Mecha uses her "accident" as a cushion to hide away in her bed and drink the day away without anyone harassing her about it. She also invents reasons to belittle her native servants, such as accusing Isabel (Andrea López) of stealing towels, a sad attempt at exerting superiority. When he hears of his mother's accident, Mecha's eldest son José (Juan Cruz Bordeu, the actual son of Borges) uses this to get away from his older lover Mercedes (Silvia Baylé), who was, strangely, also his father's former mistress. José never seems the least bit concerned for his mother's "ailment" but uses this retreat to party and lay about the house in his underwear. Tali recites her own excuses for why she can't follow through with her and Mecha's plan to go shopping in Bolivia, which is an excuse in itself to maybe reconnect with Mecha or likely get away from her family. Merely talking about the trip to Bolivia provides the biggest illusion for Mecha, who begins to resemble traits of her late mother who spent the last twenty years of her life locked in bed. 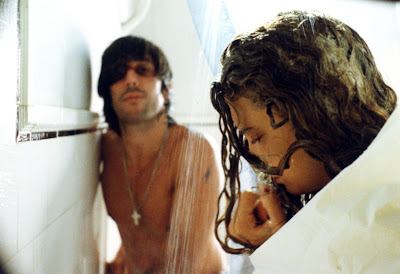 Despite this, Martel isn't out to denunciate her characters, a trick that would sell her uncanny vision short. Based on memories from her own childhood, La ciénaga is as evocative of summer as any film I've seen. Though filled with hopeless individuals and bookended by two very unsettling occurrences that happen so seamlessly they're easy to overlook, La ciénaga is utterly sumptuous. While Argentina has never been a heavyweight in the ring of international cinema, filmmakers like Lucrecia Martel are changing that. Thus, it's not so much a resurrection of nation's cinematic legacy as it is the exciting dawning of, hopefully, a new era of cinema art. 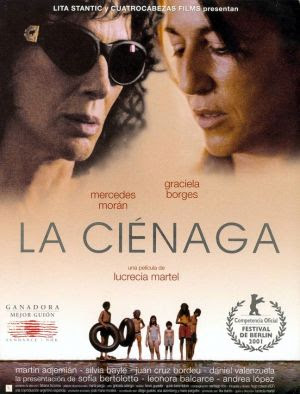 Very nice review of a very good movie, but this one is nothing compared to THE HOLY GIRL or THE HEADLESS WOMAN. It's wonderful all the same, but those two films really go on to show Martel perfecting her craft. Really amazing stuff.

She would be one of my two favorite makers to emerge this decade as well, with Apichatpong being the other. Don't make me pick between them though.

I'm not familiar with Lifschitz I don't think...I'll have to catch up. What's a good place to start?

Crap! Well, yeah, I forgot about Apichatpong. For some reason, I had thought he made another feature before Mysterious Object at Noon.

As for Lifshitz, he's only made two features (Come Undone and Wild Side), so start with Come Undone, which I wrote about here, but wait 'til after you've seen it to read that.

I'm looking forward to rewatching The Holy Girl, as it didn't enchant me as much as La Ciénaga did. However, I do think I was getting exhausted by all of the two-teenage-girls-coming-of-age films that polluted the early part of the decade (Fat Girl, Ghost World, Girls Can't Swim, Thirteen, Me Without You, Swimming, Big Girls Don't Cry, My Summer of Love).

The Headless Woman, however, blew me the fuck away.

let's also not forget about Argentina's Lisandro Alonso, who I like almost as much as Martel. I agree 100% though that Argentina deserve's Romania's lime light, proving just how Euro-biased the film world can be.

La Cienaga is amazing. No 'Best of 2000's" list has credibility without it.