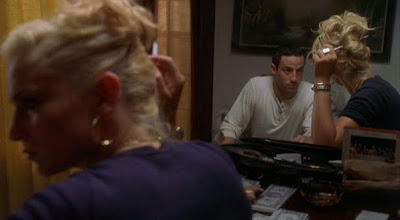 Obviously, the US doesn't know what to do with Abel Ferrara. All three of his last films (Mary, Go Go Tales and Chelsea on the Rocks) had their theatrical releases canceled, and one of his best films, The Addiction, still hasn't seen a DVD release. He's unquestionably a commanding voice in American independent cinema, so why is he so disrespected? 'R Xmas, which I must thank Girish Shambu, Andrew Grant and Jeremy Richey for convincing me to finally watch, is incredible, and yet it barely received a theatrical run before being thrown onto DVD, in the hopes of appealing to the Sopranos/Scarface crowd. 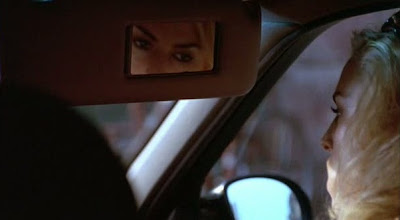 Pre-dating HBO's The Wire by a year, 'R Xmas takes a similar approach to its crime yarn, concerning a high-on-the-food-chain Dominican drug dealer (Lillo Brancato, Jr.) and his wife (Drea de Matteo) during four days around Christmas. There's a kidnapping and a double cross that follow, but Ferrara doesn't concern himself with plot devices or narrative expectations. It is, like most of his films, a skewed portrait of American dreams, but what separates 'R Xmas from many of his other films, other than The Addiction of course, is that he places a woman (de Matteo) at the center, which alleviates some of the usual aggravation that repels most of the people who hate his work. de Matteo's character, who is never named, doesn't suffer from the same Catholic agony the characters of his male-centered films do. She's faced with the same sort of moral gray area but spared the sort of misanthropic tendencies that plague the protagonists of The Blackout, Bad Lieutenant or Mary. 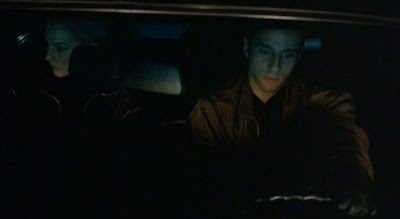 It's not often that a film calls to mind The Wire without suffering from the comparison. Ferrara not only distances himself from his characters but also from glorifying or condemning their actions. What prevails is a question of "doing the right thing," and it really is a question, not a pursuit. Leaving things beautifully unresolved, Ferrara suggests a sequel, concerning a Giuliani era chronicle of crime in (and off) the streets of New York City. Outside of an amateurish performance from Ice-T, 'R Xmas is remarkable, one of the overlooked masterstrokes of one of the under-appreciated American artists. 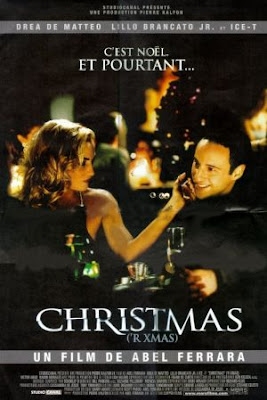 I remember watching this around 2006. I watched it with this group of spanish trip-hop heads who are in that crowd you mentioned. It was the only film in their pile of DVDs that interested me (Ferraras' name wasn't familiar to me). They hadn't seen anything else by Ferrara but really liked this film. I'll have to rewatch it to re-absorb it since my brain doesn't seem to recall much.

I agree with you though; it's definetley underrated/appreciated.

Ferrera is one of the few filmmakers creating movies with balls.. and no one gets to see them! But seriously... I love the guy and R-Xmas was a great little gem. The final scene, in its messiness and roving camera, felt like a straight homage to Cassavetes.

'R Xmas is probably Ferrara at his most unassuming, but I've always been drawn to quietly commanding films. So in some ways, I'd place the film along the lines of Assayas' Summer Hours, or in keeping with the crime theme, Xavier Beauvois' Le petit lieutenant or Cronenberg's Eastern Promises (though without that wallop of a naked fight scene).

A very nice review, and I'm always glad to see Ferrara getting some love.

Although, I will say that this statement: "...but what separates 'R Xmas from many of his other films, other than The Addiction of course, is that he places a woman (de Matteo) at the center" seems to not give credit to a wonderful little revenge piece (Death Wish knock-off) in Ms. 45! :)