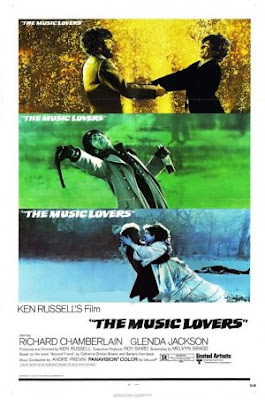 Apparently voting is the way to go these days, for both the Warner Archive Collection and Criterion Blu-ray, and now MGM. Check their page to vote for a DVD release of Ken Russell's The Music Lovers, his take on the life of Tchaikovsky starring Glenda Jackson and Richard Chamberlain, and any of the others you want to come out. Ken Loach's Ladybird Ladybird, Nick Broomfield's Diamond Skulls, Mark Romanek's Static with Amanda Plummer and Sergei Bodrov's The Prisoner of the Mountains (which is actually already on DVD and still in print as part of MGM's 'World Films' series) are other options. I'm pretty sure Russell's woefully underrated The Boyfriend belongs to Warner now (though I could be wrong). Make it count! Us Russell fans have been suffering too long. Thanks, Eric.
Posted by reassurance at 5:07 AM

I have been voting for Ken Russell films (The Devils mostly) to be released on DVD ever since they started this 'vote here' and 'sign this' crap. It's frustrating but I have a good feeling about this one. Music Lovers is one of my all time favorites; not even the bad vhs rip stopped me from loving it.

Yeah, me too, but I share your good feeling. I don't think any of those Devils petitions were organized by Warner anyway.