I've been toiling around with writing about Gregor Jordan's adaptation of Bret Easton Ellis' The Informers for the past couple days. I've tried defending my liking of it, but the words just aren't convincing. The Informers is a mess, which may or may not be a result of the studio's decision to reject the director's three-ish hour long version, and yet, in my eyes, it's the most successful attempt to bring Ellis' vision to the screen. Of course, it doesn't have a lot of competition. Less Than Zero is an abortion, and both American Psycho and The Rules of Attraction are inspired failures. Jordan does have an advantage over the other filmmakers in choosing Ellis' hands-down worst book to bring to the screen, a loose collection of sordid tales of LA decadence that feel more like B-sides to his better stories (and not the good and/or sought-after type of B-side). 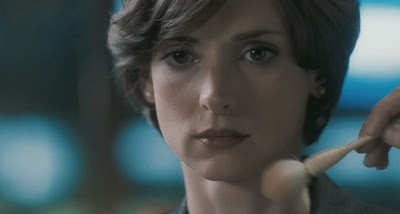 I can't decide if its bit of casting is inspired or if it simply uses the availability of its somewhat absent-from-the-screen stars. With Kim Basinger, Winona Ryder, Chris Isaak and Mickey Rourke (before The Wrestler placed him back on the map), all four would have a dream line-up in Hollywood's eyes had the film been made shortly after it was set, but in 2009, it may have been the only work those actors could find. In Isaak's defense, he was only a part-time actor, though I've always held his turn in Twin Peaks: Fire Walk with Me in high regard. So, like Rourke in The Wrestler, each of the performances exist in an alternate level of reality: Basinger as the pill-popping beauty, Ryder as the disrespected TV anchor, Isaak as the alcoholic flirt who missed every opportunity to connect with his son (Lou Taylor Pucci) and Rourke as the former bodyguard blacklisted from Hollywood after "an incident with that actress." And, really, each of their performances, along with Billy Bob Thornton's movie producer ex-husband of Basinger, are quite potent, much more so than their younger counterparts. 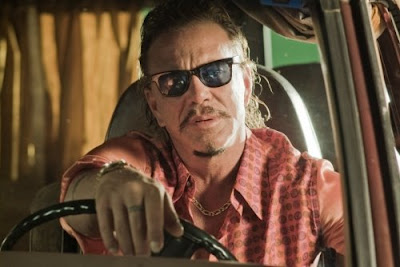 Visually, Jordan captures Ellis' world perfectly in its glassy, cloudy, empty sheen. Though the implications are glaring, the sweeping aerial shot of the Hollywood sign, ominous from a distance and graffiti-ridden up close, is absolutely radiant. Jordan avoids the showboat approach Roger Avary took to capturing The Rules of Attraction and sticks to lens filters to tonally dress the frame. What vanishes though, aside from a number of the book's characters, is Ellis' sense of humor, despite the fact Ellis wrote the screenplay with Nicholas Jarecki, director of the James Toback documentary The Outsider. His humor isn't completely absent, seen best when a woman plays her son's favorite song, Pat Benatar's "Shadows of the Night," at his funeral, but the straight-faced desolation of The Informers manages to work on some level, something Less Than Zero, the film, didn't come close to accomplishing. 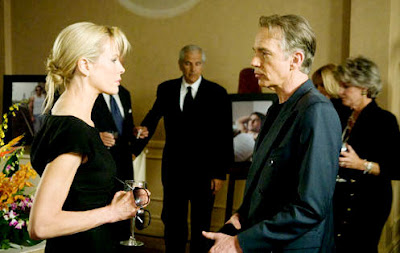 Despite the fruitful attempts by Jordan and the senior members of his cast (though, really, all of the younger actors, except for Austin Nichols as music video director Martin, are effective in their hollow poses), I think I fall into the camp of people who don't believe Ellis' work could ever be successfully translated onto the screen. With money comes a level of restraint that his novels never showed, though it's perhaps notable that The Informers left its characters' (bi-)sexuality intact (though only in mention, not in practice), whereas Less Than Zero turned Robery Downey, Jr.'s character straight and The Rules of Attraction made Ian Somerhalder's gay, both differing forms of simplification. A certain explicitness, as well as an understanding of its purpose in Ellis' world, is necessary to convey the author's ideas, and that will probably always remain the greatest obstacle between the written and filmed works. We may never see Jordan's intended version of The Informers, in the same way US audiences have never officially seen the unedited cut of The Rules of Attraction or its counterpart Glitterati, but somewhere within its current shape, there are moments that suggest the "outstanding movie floating out there somewhere" that Ellis alludes to in Scott Tobias' interview with him on The Onion's A.V. Club, and those moments, particularly the final shot, really knocked me out.
Posted by reassurance at 5:27 PM

I liked this film as well, but I found myself cheering on every bad decision in the film, as if it were my own decadent fantasy... a comedic one as well.

I was thinking since there is really no beginning or end to any of the stories, would it have worked better as a show on HBO? Then again, I thought the exact same thing about Southland Tales as well. If only I ran Hollywood.

I know what you mean by cheering on every bad decision in the film, but unlike some of the other Ellis adaptations, these bad decisions made it more compelling.

Oh. And as for films working better as a TV show, I think that about a lot of 'em. I always thought The Last Supper, that film where the grad students invited people whose political opinions they disagreed with to dinner in order to poison them, would have made a much better series... and certain films, like Friends with Money, felt more like pilots to a series.

Kicking and Screaming should have also been a TV series. I read somewhere that Baumbach did turn it into a Pilot at some point, but it was never picked up.