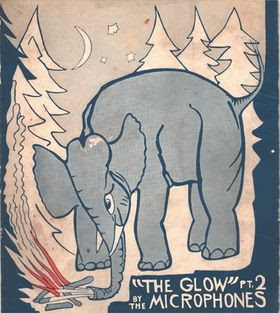 To call The Glow, Pt. 2 the quintessential 2000s "concept album" for the manic depressive twentysomething would sell it short. I'm not certain of the "concept" it's applying nor if that term is even appropriate. It is, like Neutral Milk Hotel's In the Aeroplane Over the Sea, nearly unimaginable to listen to in shuffle form, aside from maybe a track or two. And, like In the Aeroplane Over the Sea, unfathomably brilliant in its audio landscape. I don't really gather up the energy to listen to The Glow, Pt. 2 more than once a year, but it's never because I'm afraid it won't function within me the same way it always has. It's because The Glow, Pt. 2 stings, and it takes you somewhere you're not sure you'd want to go on a regular basis. You might say the same about PJ Harvey's White Chalk, but The Glow, Pt. 2 is more of an expedition than a seclusion. The Microphones, essentially a one-man project from Washington-native Phil Elvrum, would follow The Glow, Pt. 2 with the (even) more experimental Mount Eerie before retiring the name and adopting his last album as the new moniker. It's a rare, glorious gift to the headphone-set (as opposed to the iPod crew). 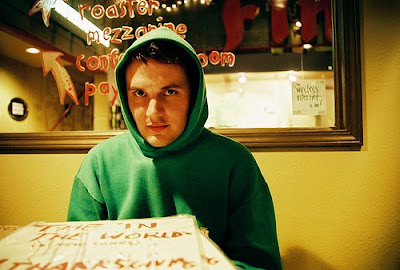 I'm pretty sure all the videos are fan-made, and really, singling out tracks is not ideal. In fact, I wouldn't even recommend watching any of the videos above as they sort of take away the magic of your own imagination... However, I thought it helpful to include some of the audio in this post. Alas...
Posted by reassurance at 1:40 AM

This is a truly amazing album. There's nothing else like it, though some of Elverum's other work (like It Was Hot, We Stayed In the Water) does come close at times. I listened to this disc obsessively when it first came out, and still put it on pretty often. And I can't imagine a time when I'm not in the mood to hear at least "The Moon," one of Elverum's best songs and his best lyrical storytelling.

"The Moon" is easily Elvrum's best song, and the single reason why I couldn't claim the entire album must be listened to from start to finish. I was really disappointed when I watched that fan video for "The Moon" and saw that it conjured up the same images I had of it: driving in a car at night.

"The Moon" tells such a complete story in its lyrics that I can't imagine linking any video images to it. Elverum's writing is very visual to begin with: you get those gorgeous impressions of a moonlit mountaintop, a beach, the nostalgic revisiting of places that held significance for an old romance. It's a wonderful song.

Interesting that you should mention The Glow, Pt. 2 in the same post as In the Aeroplane over the Sea; the two albums that pretty much inspired me to try my hand at writing and recording my own music after I initially heard them circa 2002/2003.

I still listen to them to this day, although not quite at the same obsessive, two or three times a day level that I once did, when I'd sit up for hours trying to imagine what the music would conjure up if it was turned into a film.

Linden, I think The Glow, Pt. 2 and In the Aeroplane Over the Sea are two truly essential albums for our age group. I know you and I are not the only ones who hold both of them in the high regard they both deserve.

How did the writing/recording music go, by the way?

RE: writing and recording; I still do write stuff on occasion, mostly as a hobby, but I realised that the life of a professional musician wasn't for me.

I probably should have tried to branch out into the production/arrangement side of things. I'm still fascinated by recording techniques and sound design.