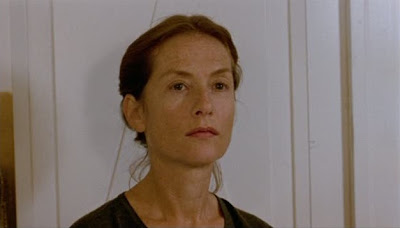 Rattle-your-ass-to-the-fucking-ground performances don't happen often, and when they do, they usually come from French actresses (though I can extend that to Swedish and/or German ones). Isabelle Huppert gives performances like that with nearly every film she graces, but none of them will probably ever reach the magnitude of her work in The Piano Teacher, Michael Haneke's masterful adaptation of Nobel Prize winner Elfriede Jelinek's novel. It could be suggested that her performance as Erika Kohut, the title character who pretty much defies the use of a simple apposition, is what keeps The Piano Teacher afloat, as the delicate nature of the material could have descended into hideous comedy if placed in lesser hands. However, the film's triumphs are a result of both Huppert and Haneke, who employs remarkable restraint as he places the greatest trust in his actor. It's actually surprising how un-explicit The Piano Teacher is when returning to it, as its emotional violence carries a weight that exceeds the consecrated brutality of the so-called New French Extremity "movement" (see Trouble Every Day and Fat Girl), but Haneke has always operated in that way. 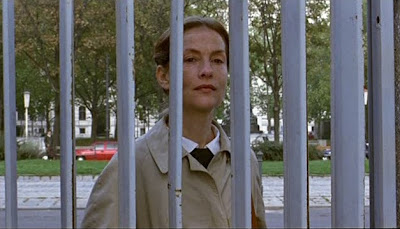 The restraint Haneke shows may have been the only way to make Jelinek's novel work on the screen, but this also allows for his camera to find something much more haunting than the display of physical violence in Huppert's face. On numerous occasions, he holds his gaze upon hers, sometimes in jump-cuts, other times in viscously long takes. It may come as some relief that the purpose of these shots aren't to understand or interpret Erika's thoughts. Haneke is never concerned with sympathy. Instead, the relationship between the camera and Erika provides the understanding of what those thoughts are doing to her. In all of the scenes that proceed Erika's bathroom meeting with Walter (Benoît Magimel), which marks her turning point, her placement within the frame, usually medium close-up dead-centered, maintains her control of the surroundings. Almost always, these shots fixate on more than just thinking; they show Erika assessing her situation and planning in order to maintain that control. 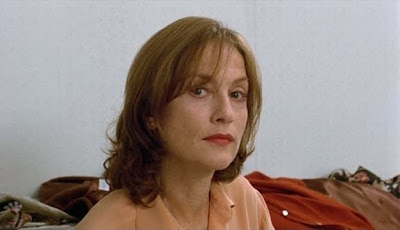 Once Erika has lost that which is so important to her, the shots take on a much different meaning. No longer is she planning; she's anticipating. Once the letter of her sexual requests has entered Walter's possession, she has given away her control. Even if the requests weren't of a masochistic nature, the transfer of control renders her a slave, for she knows no middle ground. As Walter reads the letter in her bedroom, her mental process relies solely on someone else's response. There is a progression to this change, which begins the moment she accepts Walter's kiss in the bathroom. In this scene, she disappears for the first time, both inside and outside of the frame. Once the embrace is initiated, Huppert's tiny frame literally vanishes behind Magimel's comparatively broad physique. As the scene goes on, she disappears again when fellating Walter, placing him in the camera's focal point. Erika's gravitational placement also indicates the beginning stages of her descent. Walter gets Erika to fall to her knees. She quickly returns to her feet, but as the film advances, it becomes evident that Erika's moments of weakness all occur when she's on her back, whether it be on the floor of a locker room or her foyer with Walter or in bed with her suffocating mother (Annie Girardot). In the bathroom scene, she's still able to exert a projected austerity, that which has kept her on top until this point, but this vanishes once she's handed Walter the letter. 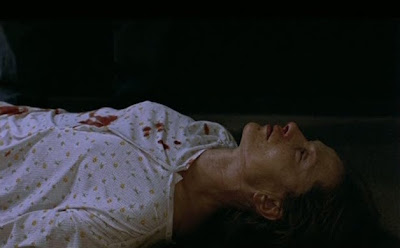 As Walter half-heartedly attempts to adhere to her requests, he's placed in the position he thinks he's striving for, partially for the success of his pursuits, which Erika always suspects as his musical undertakings implore the same gain, and partially because he's a man. "You should know what you can and cannot do to a man," he tells Erika after she refuses to let him ejaculate, as if the fact that he has a penis is his innate leverage. He gets Erika on the ground twice afterward, the first in her desperate attempt to normalize the relationship in the locker room, the second when he fucks her by force in her apartment. The latter results in the second-to-last time the camera holds on Erika's gaze. She processes what has just happened and again she's left without a plan. At the recital that follows and closes the film, Erika comes to her greatest understanding. Walter has confirmed her early suspicions; his fallacious greeting at the recital proves what Erika's always known about him and men in general: that he'd leave once he got what he really wanted. His want is to conquer, both on physical and mental levels. 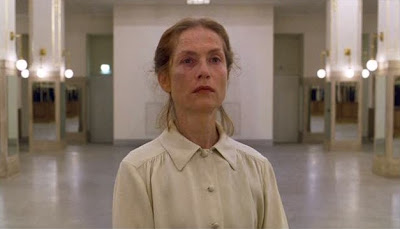 As we see Erika's face for the last time, which is bruised and torn apart, something that's subtly concealed as she prepares for the recital, she returns to the same gaze she would hold before giving Walter the letter. By plunging the knife in her chest, a moment that's incredibly unsettling, we discover this isn't an act of desperation or dejection, but the means in which for Erika to re-assert control. Though it's only implied, suicide doesn't serve as an act of hopelessness but of power. She again retains control of her situation and, most importantly, of herself, surmounting any damage caused by Walter in his abuse of her willing vulnerability. It is, perhaps, the ultimate control, and Erika understands that it is the only way to retain it. When the film descends into its most devastating moments, The Piano Teacher becomes all the more dangerous because it's sadomasochistic play without a safe word. Though Erika ultimately comes out on top, it's through her last resort. 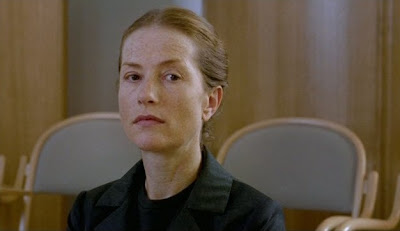 Haneke very finely inserts his obsession with the media when Erika's ideas of men begin to personify the ludicrous sitcom her mother watches earlier in the film where a nurse suggests her patient thinks women are inferior to men. He never allows this to take precedence as it has in nearly all of his other works, from The Seventh Continent [Der Siebente Kontinent] to Caché, so it's a bit surprising that the film in which his artistic obsessions exist in the background would be his greatest triumph. Elements of Erika can be found in many of Huppert's prior and subsequent performances. She had previously worked from Jelinek's writing in Werner Schroeter's Malina, which Jelinek adapted from Ingeborg Bachmann's novel, and is currently set to star alongside Tilda Swinton and Udo Kier in Ulrike Ottinger's Die Blutgräfin, which Jelinek co-wrote. It's also worth noting that her role in François Ozon's 8 Women [8 femmes] is almost a parody of Erika. However, it's pretty hard to argue with the notion that The Piano Teacher is her finest hour, and perhaps even the finest single piece of acting we've seen all decade. 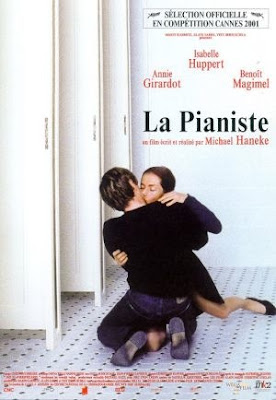 Amen. This is a really amazing performance and a pretty great film. I prefer CACHE as a whole (and, being the Haneke enthusiast I am, I'm going to write on CODE UNKNOWN for Film For the Soul's Counting Down the Zeroes series) but I can't argue with Huppert or really anything about this movie. Haneke's art, despite the fact he is becoming known as aggressively violent, always lies in his restraint: camerawork, performance, tone, mood. He really hit his stride this decade with this, CODE UNKNOWN, and CACHE. Hopefully he can make up for the botched remake of FUNNY GAMES...