There's a certain difficulty on critiquing the "now." There's always a risk of getting lost in the unknown, particularly as Olivier Assayas confronts the digital, Internet medium, with technology advancing and shifting at a rapid pace. With demonlover, the film should have by all counts felt stone-cased in its early-'00s when revisiting it, but it doesn't. At all. This is one of the many reasons why Assayas is such a gifted (and undervalued) filmmaker. His films and his themes all surpass their "now" expiration date, and in demonlover, his missteps and "inabilities" in the film's final third feel strangely appropriate for a film with issues as unsolvable as demonlover.

More than a corporate thriller (which it is, to some extent), demonlover is the first, and maybe only, neo-neo-noir, confronting technological fears with no direct allusion to what came before it. As pulpy and sleazy as demonlover may appear (it has Gina Gershon wearing a T-shirt that says I Heart Gossip), it's almost entirely un-ironic. Its similarities to Hong Kong action-ers (mainly the ones the female-centered ones that starred his former wife Maggie Cheung) and corporate thrillers are seamlessly infused into demonlover's surfaces (which also include gorgeous photography from Denis Lenoir and a dazzling post-rock score from Sonic Youth). In evading the elitist cues one might expect from not only a film like this but from a former Cahiers du Cinéma writer, the female-dominated, amorally cutthroat corporate universe becomes as curiously real as the animated pornography the business is killing to acquire does.

However appealing demonlover's genre tricks may be, the most fascinating elements of the film are the ones that feel out-of-place. While Diane (Connie Nielsen), a corporate spy trying to derail a deal between a French corporation and a Japanese anime company, appropriately remains a mysterious figure in the whole entanglement (we're never given a nationality or a real name for her), the same can't be said for Elise (Chloë Sevigny), an American girl whose professional position is never clear in the offices. We're treated with brief glimpses of a life outside of this world: a boyfriend who's only seen momentarily in the airport, a daughter for whom she hires a babysitter when delivering nighttime threats to Diane and a peculiar fascination with playing violent video games in the nude. What is this pretty, awkwardly-dressed Yankee girl doing here, and where in this shaky hierarchy does she fall? I'm still not sure, though it's worth mentioning that Elise seems better versed in (and emotionally separated from) what Diane and company are trying to annex; Diane and her partners appear oblivious to any details of what they hope to acquire. And then there's the first interaction we see between Elise and her hospitalized maybe-boss Karen (Dominique Reymond), where Elise appears offended by Karen's statement that she feels like she's been raped. "C'est quand même pas la même chose [It's not the same thing]," she says, lowering her eyes, suggesting that her grip on reality is stronger (and more dangerous) than we might later suspect.

Like his later Boarding Gate, one of the film's best scenes occurs between the abject, ambiguous revelations between two of the characters. After Diane's bit of espionage has been uncovered, she dines with former partner Hervé (Charles Berling, almost unrecognizable in his shabbiness). The scene is layered in deception and dizzying performance as Diane unsuccessfully(?) tries to reassert the control she killed and drugged (but not fucked) to obtain. Around this point in the film (though I believe it begins when Diane agrees to Elise's uncertain conditions), demonlover derails. Most people saw this as the film's defeating flaw, but ultimately it adds to demonlover's mystique, as well as its horror.

Assayas is not a moralist, as many other critics have agreed; this keeps demonlover from being a mere cautionary tale. In the epilogue, where a suburban teenage boy steals his father's credit card to log into a torture porn site, I came to a stronger understanding of what Assayas was trying to portray. As Vadim Rizov states in his review of the film, "the heart of evil is located in innocence." But it's more than innocence, he explains, it's "numbed indifference." It isn't a sort of Columbine-era mentality that violence-in-the-media encourages violence-in-life. Instead, Assayas reveals the intricate chain of evil, from the Japanese company's "issue" with one of their animators using underage girls as models to Diane and Hervé's ignorance to Lara Croft to the parallels between Elise's professional involvements and her gaming to this teenager's dark fantasy indulgence. The chain has been set, and Assayas isn't foolish enough to speculate where it might have begun or will end.

In addition to Rizov's, I should also direct you to reviews of the film from Daniel Kasman, Ed Gonzalez and Michael Joshua Rowin (also here), as I scrapped two attempts at trying to tackle the film before settling on this one (and I took some inspiration, or direction, from their write-ups). 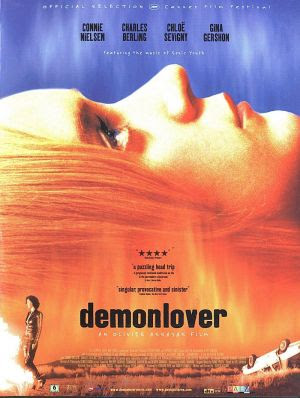 Incidentally, I'm amazed you found that old review. Everything I wrote at the time was just wrong, wrong, wrong and not that well expressed to boot. I've watched it again since, and I was way out of my depth.

I found it because I was specifically looking for it after what you said about demonlover in the comments section of 'Un Certain Disregard.'