Thanks Eric. Nicholas Ray's Party Girl, not to be confused with the Parker Posey vehicle from the mid-'90s (Hello, Chanel!), is now part of the Warner Archive series, which is a bit of great/disappointing news. Great as in it's finally available; disappointing as in 'doesn't Nicholas Ray deserve better than this?' Considering two of his most famous films, Johnny Guitar and Bigger Than Life, are still MIA on DVD in the US, I suppose something is better than nothing. Maybe. 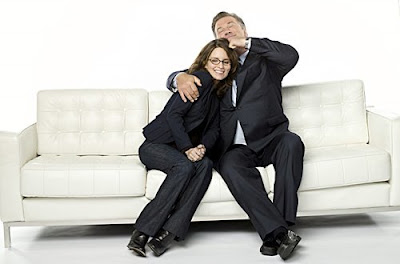 On an unrelated subject, I ran across an article by Jonah Weiner on 30 Rock and its (?) conservative leanings (thanks, Lex). It's a fantastic read, but I think Weiner overlooks the fact that Liz Lemon (Tina Fey) and her (wo)manchild-ness and walking-on-thin-ice liberal-ness are treated in the same vain as Jack Donaghy and his artless corporate-ness are. I did, however, forget how funny it was when Carrie Fisher referred to her neighborhood as "Little Chechnya."
Posted by reassurance at 2:36 PM

Weiner's article is a fun exercise, but I don't think diagnosing a show ideologically is relevant anymore.

Expand on that, Eric.

Weiner's diagnosing 30 Rock as a conservative show, yes? This type of (pyscho)analysis tells us nothing about the medium, and littler about our culture. It's a pop reading. Weren't these big in 80s academia? Don't most schools (with the exception of maybe NYU) reject these sorts of arguments?

Though, my glib one-liner criticism of Weiner's article may have been just as irrelevant to the conversation. It falls somewhere in between the completely off-topic and the completely obvious. (It might also be worth noting that I've been on medication all day.)