As I’ve never thought much of Sam Raimi (I think I’m allergic to almost all things remotely fanboy-ish), the raucous, invigorating joy that Drag Me to Hell diffuses in its 100 minutes came as one of the great personal surprises of the year. Like all of the best horror films of the past decade (Inside, The Descent, Martyrs, In My Skin), Drag Me to Hell borrows from old genre hats (or, in the case of Martyrs, a new one) and revitalizes it, though Raimi takes a distinctively different path than those Europeans do. Like its peers, Drag Me to Hell ranks high on the gross factor, but Raimi accentuates this without a bit of sadomasochism (I was going to go with straight sadism until I considered In My Skin).

Drag Me to Hell is a clever offshoot of body horror, just as it is a smart derivative of our ideas of the inherently “self-aware” horror/comedy. “Body” isn’t appropriate, as the film takes no interest in uncovering the corporeal mysteries; instead, Raimi sticks with the grotesque exchange of unnaturally proportioned bodily fluids. One of the funniest moments in Drag Me to Hell occurs when the film’s heroine Christine Brown (Alison Lohman), fully in the midst of the ancient curse placed upon her by the gypsy woman (Lorna Raver) whose loan extension she denied, discharges a heavy stream of blood out her nose and onto her boss, the bank manager (David Paymer). Drenched in Christine’s nasal seepage, the bewildered Paymer replies, “Did I get any in my mouth?”

If you hadn’t grasped what exactly Raimi had in mind with Drag Me to Hell after the amazing showdown between Christine and the gypsy woman in the parking garage, the bank manager’s response to being doused in Christine’s blood is the biggest clue you’re going to get. The vulnerable, exposed mouth is Drag Me to Hell’s repeat victim, and poor Christine’s happens to be violated every fifteen or so minutes. The self-awareness Raimi demonstrates in Drag Me to Hell is not the archetypal sort we’re used to for a film like this. His disposition is neither patronizing nor congratulatory; it’s a genuine cognizance of the aspirations he has for the film. In understanding that Raimi wants nothing more from his audience than provide them with an exceptionally good time, he truly goes beyond the call of duty.

While entertaining the shit out of your audience (particularly, me) is no small victory, two other factors play a major part in Drag Me to Hell’s success. The first is Alison Lohman. I’d pretty much written her off after a trio of giant duds (Where the Truth Lies, White Oleander, Big Fish) followed by a film I didn’t see where she plays a girl eleven years her junior whose only dream in life is to ride horses. But I take it all back. As the ambitious, cursed bank loan officer, Lohman turns Christine into an irresistibly charming character who’s both savvy and, refreshingly, fallible. Tiny quirks like listening to an instructional CD of how to drop her Southern accent (being a cute little Southern belle doesn’t really cut it in the Los Angeles business world) only accentuate her likability, a trait Lohman earns instead of inherits (from the script). The other facet that must be mentioned when discussing the finer points of Drag Me to Hell is its sound design. Only so many critters and so much phlegm can find their way into Christine’s mouth before it becomes tiresome, but with such precise audio effects and mixing, every aural intrusion manages to surfeit Raimi’s spirited repulsion. Once Lucifer makes his way to earth to bring Christine back to hell with him, the sound department brings out the heavy artillery, and boy is it wondrous. Never underestimate a film that puts that much virtuoso attention to detail for the not-so-simple objective of ensuring you have a damn good time at the theatre. 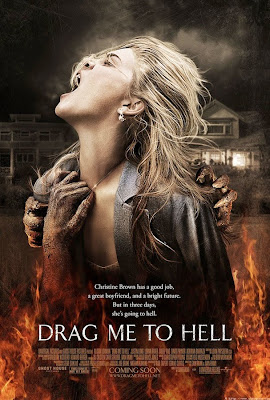