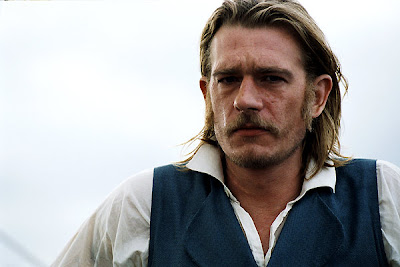 Set in the early 19th century, The Duchess of Langeais begins with the final hours of a man’s widespread quest. Bowlegged French general Armand de Montriveau (the late Guillaume Depardieu, in probably his finest performance) finds his estranged lover Antoinette (Jeanne Balibar), or best known as the Duchess of Langeais, sequestered in a Spanish convent, in an attempt to escape the treacherousness of their doomed affair. From Armand's rediscovery of Antoinette, the film moves back in time to their first meeting as courageous soldier and married duchess at a lavish ball. Following that initial meeting, their relationship unfolds in games of humorless wit and searing manipulation with Jacques Rivette, working from a novel by Honoré de Balzac, never shadowing the lovers' selfishness and despicability. 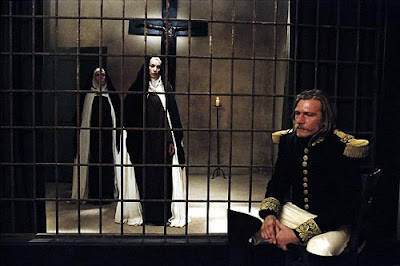 The Duchess of Langeais, or Don’t Touch the Axe as it’s properly translated, is what I often refer to as the anti-period film. Though, in certain people’s minds, the “period film” (or “costume drama”) exists as a legitimate genre of film, it isn’t. While it’s merely a superficial association, it’s hard to deny that within that set there are films that follow an unwritten set of stylistic and narrative rules (most of which appeal greatly to the voting members of the Academy). The Duchess of Langeais is not one of those films, nor should anyone who recognizes Jacques Rivette’s name suspect that it might be. Instead, The Duchess of Langeais is a rigid, brilliant and trying piece of cinema, something of a “breeze” at 140 minutes (compared to most of the director’s work, excluding his latest 36 vues du Pic Saint-Loup, which is his first to clock in at under two hours). It’s difficult to call Rivette a director who puts every minute of his films to the best use, but I’d never call some of his more laboring moments “filler.” He’s a director that understands the rewards of time and the sort of magic that can only occur after the viewer has fully dedicated himself or herself to the film. For the dedicated viewer, The Duchess of Langeais reaps that sort of reward handsomely. 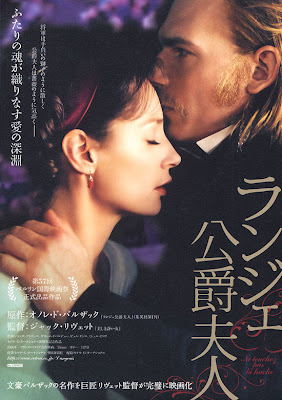 As you know, I love this film too. I agree that this film, like all of Rivette's films, works best for those willing to commit themselves totally to its strange vision. Once you adjust yourself to Rivette's aesthetic, it even begins to seem like a comedy; in its way it's quite funny, especially once you get attuned to all those creaking floorboards and deadpan witticisms.

And, Hello Ed! I knew a little Rivette would pique your attention.

The film is extraordinarily witty (the exchanges between Depardieu and Bailbar are incredible in terms of writing, acting and direction), but I can't say I ever got to the point of laughing.