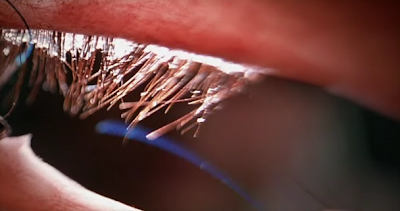 My disdain for the "docudrama" or the "biopic" is a frequent topic of discussion on this blog, so a retread isn't necessary. Director Julian Schnabel has made his film career out of the genre. His first film looked at the painter Jean-Michel Basquiat (Basquiat), and the second was an adaptation of Cuban poet Reinaldo Arenas' autobiography (Before Night Falls). As The Diving Bell and the Butterfly marks only his third film, it's difficult to say whether Schabel's adaptation of Jean-Dominique Bauby's memoir of the same name completes an unnamed trilogy of artists whose lives were cut too short. Nonetheless, the film continues Schnabel's fascination, approaching Bauby, the former editor of French Elle magazine, with an impeccable perspective that almost completely overshadows the work he did on Basquiat and Arenas. 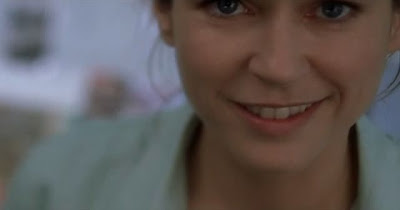 At the peak of his career, Bauby (Mathieu Amalric) suffers a stroke that renders him almost entirely paralyzed and unable to speak. At the age of 43, Bauby was the editor of the prestigious Elle, a father of three and lover of many women, including his wife Céline (Emmanuelle Seigner) and sometime mistress Joséphine (Marina Hands). The stroke drags Bauby, referred to by his friends as Jean-Do, into what's called "locked-in syndrome," with the only possibility of communicable interaction being in the form of his left eye. In a sort of updating of The Miracle Worker, language specialist Henriette (Marie-Josée Croze) develops a system of communication through blinking and a utilitarian alphabet, thus prompting Jean-Do to write his memoir through a long series of winks. 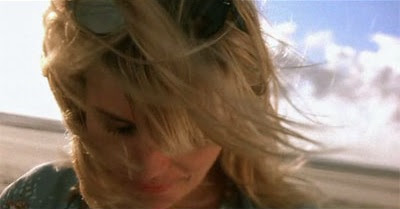 The Diving Bell and the Butterfly is, as you probably know, a lot more vibrant that it sounds. With the aid of cinematographer Janusz Kaminski, who's acted as director of photography on almost every film Steven Spielberg has ever made, Schnabel turns The Diving Bell and the Butterfly into an experiment in perception. A large portion of the film is shot from the viewpoint of Jean-Do's functioning eye; the film inevitably draws up its curtains at the very moment Jean-Do wakes up from his coma. The images are blurry, frustrating and entrancing and eventually form a rhythm of storytelling unlike anything you've likely seen before. It only becomes more apparent how well Schnabel and Kaminski's experiment worked when they do the unthinkable and take the camera outside of Jean-Do's head. I'm still a bit unsure why Schnabel found it necessary to switch the film into third-person, if for no other reason that to remind you how remarkable the film was when it was still communicating in the first. 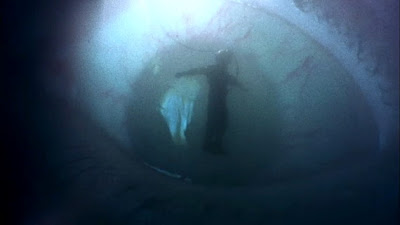 Ultimately, when you peel off everything and get to its core, The Diving Bell and the Butterfly serves as an especially good example of "well, if you're gonna make a film about [insert your exhausted subgenre of film, in this case an uplifting film about real person who becomes an invalid], you'd be lucky to make it as good as this." The Diving Bell and the Butterfly is less about Jean-Dominique Bauby, a man few Americans probably were aware of before the film came out, than it is about voice and language in film and storytelling. It's at turns dazzling and beautifully chaotic and, at the end of the day, Schnabel's finest foray into infusing his artistic roots into the landscape of film (because, let's face it, the only thing exceptional about Before Night Falls is its lead actor, Javier Bardem, and maybe Johnny Depp as a transsexual... and can you even remember if Basquiat was any good?). 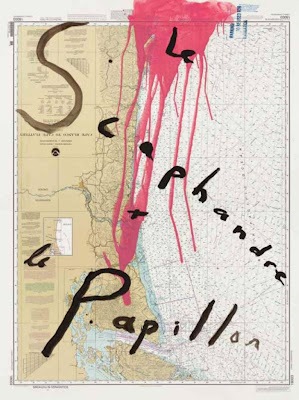 I didn't saw this movie yet, but like you said, movie weekend haha thanks for sharing, I'll keep reading your blog.

The picture of the eye with a human silhouette in them is so so awesome, perfect for a t-shirt.