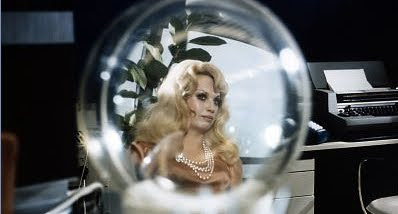 Rainer Werner Fassbinder's three-and-a-half-hour-long mini-series Welt am Draht (World of Wires or World on a Wire in English), an adaptation of Daniel F. Galouye's Simulacron-3 (also adapted for the Hollywood dud The Thirteenth Floor), will finally crawl out of obscurity in Germany this coming February. It will screen at the 2010 Berlinale, fully resorted with the supervision of co-cinematographer Michael Ballhaus, and a DVD release from Arthaus/Kinowelt will follow on 18 February in Germany. Welt am Draht stars Klaus Löwitsch, who would later work under Fassbinder in The Marriage of Maria Braun, Despair (another of RWF's elusive features) and alongside him in Shadow of Angels (again, rare); Günter Lamprecht, Gottfried John, Margit Carstensen, Ulli Lommel and Kurt Raab co-star, with Werner Schroeter, Peter Kern, Rudolf Waldemar Brem, Eddie Constantine and Ingrid Caven (in an uncredited role) in smaller roles. Unfortunately for those who don't speak German, the Arthaus disc will not contain English subtitles, so keep your fingers crossed that an English-friendly edition follows shortly afterward. More details about the DVD release (in German) can be found at Kinowelt's site.
Posted by reassurance at 4:22 AM

Wow, I'd never even heard of this. Thanks for the info!

This is some exciting news.

Thanks for pointing out that spelling error... I wonder if we'll see any other hard-to-find Fassbinders start to show up.

What really surprised me when I lived in Germany was that although they sometimes played his films on television (mostly on his birthday), they didn't seem to be readily available in video stores. Neither for rental nor for purchase.

I get kind of peeved when I notice things like Rushmore on Criterion when so many movies by people like Fassbinder and Rossellini are unavailable in the United States. I suppose one day we'll be able to stream just about every movie ever made. Until then, I guess we'll continue to watch GREED on VHS and think longingly about Women in New York and Lili Marleen.

Did they play his harder to find films (like Wildwechsel) on TV, or just the usuals?

I remember someone telling me that Criterion plans to release Lili Marleen but that the hold-up had been in regard to the low quality of the prints of the English-language version of the film. I don't remember who told me that, but it sounds like Criterion (it's the same reason they have yet to release Antonioni's La notte).

Seeing things like Rushmore on Criterion's line doesn't particularly bother me, as I know, even if they did gather plenty of special features, they didn't pump a lot of time and money into it... and it's releases like that and fucking Benjamin Button that are likely to produce the funds to release the more expensive digital restorations of films that won't recoup the money back on their own.

I only remember seeing the usuals. I watched parts of Berlin Alexanderplatz on arte, which is sort of like PBS mixed with what Bravo used to be. I also watched In a Year of 13 Moons on television. It seemed then like I could find more of them here than there but that was eight years ago so maybe those are easier to find now. It didn't seem like they were big cinephiles in Germany though. Not even in Berlin. Unless I wasn't looking in the right places.