With the great Agnès Godard working as the director of photography, Sébastien Lifshitz’s second narrative feature Wild Side invites the very easy comparisons to the cinema of Claire Denis. Lifshitz’s allusions to Denis aren’t simply visual, however. Following Presque rien and Les corps ouverts, Lifshitz has mastered the art of the elliptical narrative, a trait often met with disdain after it become all-too-common in the ‘90s as well as the best tool for directors to dish out cheap “surprises.” For both Denis and Lifshitz, the elliptical narrative provides something genuine; the gaps and shifts in time are poetic decisions, not mischievous ones.

Nearly the entire “story” of Presque rien lies outside of its frame, never truly explaining the specifics of its central character’s mental state or how his summer romance fell apart. Like Presque rien, Wild Side is framed around what most people would qualify as a significant moment in Stéphanie’s (Stéphanie Michelini) life. For Mathieu (Jérémie Elkaïm) in Presque rien, it was his “first love;” for Stéphanie, it’s the return home to care for her dying mother (Josiane Stoléru). Lifshitz only uses these scenarios as reference points; neither leads to sudsy bits of melodrama. They almost begin to function as anti-melodramas, films that adopt the foundation of the genre while consciously evading its dramatic signifiers. The focal points of Lifshitz’s films exist in their aftermath of those evaded criterions, something that beautifully mirrors the way he defines his characters through their unarticulated emotional wounds.

Alongside the Denis associations, there are hints of Ingmar Bergman’s middle period work, when the director became obsessed with faces and the truths that hide within them. For Bergman, those faces belonged to brilliant actors he had worked with for the better part of his career. In Wild Side, Lifshitz used a cast comprised mostly of non-actors, aside from the late Yasmine Belmadi (who made his acting debut in Les corps ouverts) and Stoléru, predominantly a theatre actress. It’s uninteresting to ponder how much of reality there is to be found in the characters of Stéphanie and Mikhail (Edouard Nikitine) than to simply admire the depth and history conveyed through their faces.

More than just faces though, Wild Side, which obviously takes its name from the famous Lou Reed song, is about the body and the mysteries within them. Opening with a collage of medium close-ups of Stéphanie’s naked body on a bed. Shots of her back, her legs, her ass and eventually her cock provoke the underlying question in Wild Side. Following the opening montage, we see Stéphanie at a nightclub where Antony Hegarty, the transgendered lead-singer of Antony and the Johnsons, performing the song “I Fell in Love with a Dead Boy,” ending with another question, this time explicitly uttered in the form of song, “Are you a boy, or are you a girl?” Hegarty stares at Stéphanie as he sings this bit, though gender identification is only a small facet of the question Lifshitz asks in Wild Side.

Composed of a functional ménage à trois between Stéphanie, who sells her body for a living, Russian immigrant Mikhail who speaks very little French and Djamel (Belmadi), a young prostitute of French/Arab descent, the characters in Wild Side search for the answer through their broken blood relations, in their physical make-up and the changes it has gone through, natural or otherwise, and in each other. Mikhail and Djamel can barely communicate with each other due to language barriers, while Stéphanie and Mikhail’s outlet for verbal interaction is in English, their second language. These limitations offer the biggest clue to their introspective quests, as well as providing something of a correlation to Lifshitz’s cinematic world, one defined best by its implicit beauty. 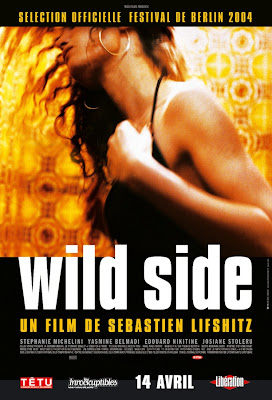 I just watched this and I think this is a great piece. Well done.

Thank you. I feel really strongly about this film (and, well, all the other Lifshitz films I've seen thusfar), and I'm happy with it being available on Netflix streaming that it's reaching a wider audience.