Profoundly peculiar and picaresque, Lucile Hadzihalilovic’s feature debut Innocence ranks among the most startling, magical cinematic portraits of adolescence in recent memory. Set at a mysterious all-girls boarding school where new recruits arrive in caskets marked with a giant star on top, the film tracks three of the near-forty girls who find themselves at this school, hidden away from the world by nature and a giant wall along its perimeter. Iris (Zoé Auclair) is the youngest of her house, wide-eyed and confused, missing her little brother and clinging to the eldest of the house, Bianca (Bérangère Haubruge), who’s in her final year and slowly approaching sexual maturity. In the middle of them, age-wise, is Alice (Lea Bridarolli), an awkward-looking young girl who dreams of leaving the community by impressing the directrice (Corinne Marchand) with her dancing skills.

There seems to be something overly schematic about Innocence, like an unbreakable code surrounding physical attributes of the young girls, based on the specifically colored ribbons that adorn their hair, which signify the age, or grade, the girls are in. A not-so-small detail that is hard to ignore is that the young girl who disappears early in the film is the only one of her peers to tie her hair in a straight ponytail as opposed to side pigtails. It’s not a coincidence surely, but Hadzihalilovic never makes breaking this code simple, if even possible, an act that keeps the narrative’s focus from feeling as clean as it appears.

Instead, Innocence comes across like a dream-like fable of pre-menstrual female adolescence (the girls are sent away from the school around the time they have their first period). Gorgeously rendered by cinematographer Benoît Debie, who shot Hadzihalilovic’s husband Gaspar Noé’s two most recent films Irrèversible and Enter the Void, Innocence never drops its visual spell, making the girls’ journeys formed out of a balance of obedience and childlike curiosity. It’s hard to know what to make of the two adult teachers, played by Marion Cotillard and Hélène de Fougerolles, who are both sympathetic to the girls’ maturation and working toward a strange archetype of feminine elegance. Innocence is a haunting parable, one that’s neither easy to decipher nor quick to leave one’s mind. 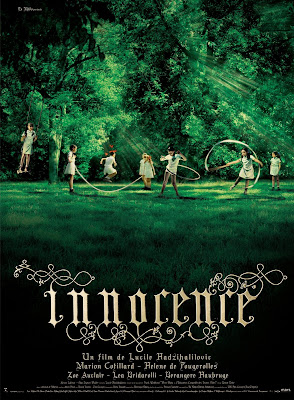 You may be interested to know that the first-ever English translation of Wedekind's Mine-Haha, the novella on which the film is based, is due for publication by Hesperus Press, London, early in the New Year.

That's fantastic news. Thanks for informing me.

Now, if only Hadzihalilovic can get around to making her follow-up...

Innocence is a 2004 French film written and directed by Lucile Hadžihalilović, based on the novella Mine-Haha,fleshlight stroker or On the Bodily Education of Young Girls by Frank Wedekind, and starring Marion Cotillard. It takes place at a mysterious girls' boarding school,London Escort Agencies where new students arrive in coffins. The film was well received by critics, winning five awards.

hello!! Very interesting discussion glad that I came across such informative post. Keep up the good work friend. Glad to be part of your net community.

Nice to read your blog on this website. different experience to read this blog. i get some awesome information throw this article.hcg