The music of Nick Cave always invoked a world of dark souls, and its scope, from the conceptual Bad Seeds’ album Murder Ballads to tracks like “Lover Man” and “The Mercy Seat,” surely have a taste for the cinematic. That he chose the western as his foray into that world shouldn’t surprise anyone, and for fans of his (myself included), his involvement in the two best westerns of the ‘00s is even less surprising. Between scoring The Proposition and The Assassination of Jesse James by the Coward Robert Ford with Warren Ellis, Cave was responsible for writing the screenplay for the better of the two, a brilliant parable of family and vengeance.

Through the western genre, Cave reduces man to its carnal, instinctual beast-like qualities, placed in a godless wasteland of the Australian outback near the end of the nineteenth century. The captain of a British colony (Ray Winstone) gives clemency to Charlie (Guy Pearce), one of a band of outlaws responsible for the rape and murder of a local family, if can lure his older brother (Danny Huston) from hiding in order for justice to be served. Cave and director John Hillcoat establish the defining characteristics of the genre—the scrupulous codes of honor, the separation between civilization and barbarism—with fabulous skill. With uniformly superior performances from Pearce, Winstone, Huston, Emily Watson and John Hurt, The Proposition is both distressing and, at its center beneath the grime and ghastly violence, marvelously humane. 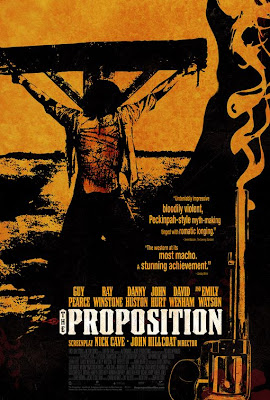